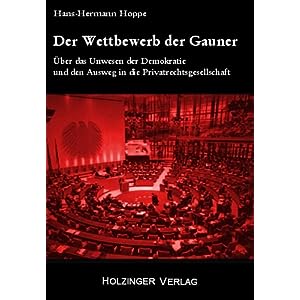 As noted previously, Professor Hoppe’s most recent book was recently published. It is an introduction to the field of private law societies and contains translations of several speeches held at the PFS and the LvMI, texts from LewRockwell.com and interviews from German newspapers. Amazon.de link; publisher’s website. (Other German-language publications and translations of Hoppe works.)

A new English translation of an interview with Professor Hoppe about his book has just been published:

I recently posted my own very loose translation of an interview in German conducted with Professor Hoppe, by the German web site, MisesInfo. Fortunately, on behalf of the Professor, Robert Groezinger has produced a much more polished and accurate version of the same interview, which is hot off the press, below, from his word processor. Share and enjoy:

First of all, Mr. Hoppe, thank you for taking the time to give us this interview. You have written in your new book, Der Wettbewerb der Gauner (“The Competition of Crooks”), that “We don’t need a European super state, which the European Union is seeking to establish … but rather a Europe and world consisting of hundreds or even thousands of tiny Liechtensteins and Singapores.” Such a trend is not apparent at the moment, rather the opposite. Do things first have to get even worse – politically and economically – , before they get better again?

Unfortunately, I’m afraid so. Before that we’ll probably have to experience national bankruptcy spreading through Portugal, Spain, Italy and ultimately on to Germany. Only then, I fear, will it become clear to everyone what many people already suspect now: that the EU is nothing but a gigantic machinery of income and wealth redistribution, from Germany and the Netherlands to Greece, Spain, Portugal, and so on. But that’s not all. It will also become clear that the same insanity, the same mess, exists even within each individual country: redistribution from Bavaria and Baden-Württemberg to Bremen and Berlin, from Little Town A to Little Village B, from one company or industry to another, from Smith to Jones and so on – and always following the same perverse pattern: redistribution from the more productive countries, regions, places, companies and individuals to those that are less productive or not productive at all. Bankruptcy will bring all of this to light in a dramatic fashion.

And perhaps then, finally, will come the realization that democracy – in whose name all these dirty tricks have been done – is nothing more than an especially insidious form of communism, and that the politicians who have wrought this immoral and economic madness and who have thereby enriched themselves personally (never, of course, being liable for the damages they have caused!), are nothing more than a despicable bunch of communist crooks.