Foreword to Sean Gabb’s Radical Coup: A Case for Reaction 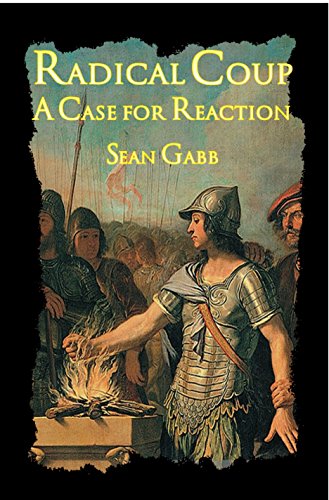 Sean Gabb’s Radical Coup: A Case for Reaction (The Hampden Press, 2018) has recently been published. It includes my Foreword, reproduced below.

It is no easy task to list all of Sean Gabb’s talents. He is a historian, a sociologist and social critic, a political and legal theorist, a linguist and classicist, as well as a prolific and highly acclaimed novelist, and in all of his writings he is, if I may be so presumptuous to say so as a non-native speaker of English, a great stylist of the English language. Above all, however, he is a libertarian. Indeed, Sean Gabb is England’s Mr. Libertarian.

All of these talents of his also, to varying degrees, come to bear in the present work Radical Coup. A Case for Reaction, which is the successor, revised and expanded to more than twice its original length, of Gabb’s earlier Cultural Revolution. Culture War, first published to much praise in 2007.

As its title suggest, this is not a book on libertarian theory. Gabb is not an armchair theorist who attempts to answer the question of how a libertarian judge would or should apply the fundamental principles of libertarian law to various, far-fetched hypothetical situations of interpersonal conflict. Nor does he more than merely touch upon the question of what would be the appropriate punishment for some given crime. However, this does not mean that Gabb is not taking a firm stand on various issues that are controversially discussed among libertarian theorists. Thus, he speaks out in favour of copyrights, and he takes a firm stand against the institution of limited liability corporations. As well, while he regards the economic law of comparative advantage or more generally, to use Ludwig von Mises’ terminology, the Ricardian law of association as logically unassailable, he warns against an uncritical, starry-eyed praise and promotion of free trade. For, as he correctly points out, the “free” geographical flow of goods in the present world is actually greatly distorted not just by taxes and duties but in particular also by massive, tax-funded infrastructure expenditures (highways, bridges, tunnels, railroads, airports, etc.) that systematically advantage distant, national or international suppliers of goods at the expense of competing, near-by local and regional suppliers and is thus anything but genuinely free trade.

Rather: Instead of arcane syllogisms of libertarian theory or some pious incantations of an alleged cosmopolitism and universalism that barely mask their proponents’ underlying provincialism and deep-seated egalitarianism, both of which, as Murray Rothbard, the founder of modern libertarianism, had already lamented decades ago as becoming increasingly characteristic of the US-American libertarian movement, Sean Gabb’s book offers a rich tapestry of comparative history, culture and tradition from a libertarian perspective. Naturally, the book’s main audience are the English and more generally the people of Great Britain, and its central topic is the historical development of English and British political institutions, culture and traditions. In particular, the reader is given an incisive account of the gradual transformation of a country from its one-time liberal-libertarian beginnings first, during much of the 20th century, into a prime example of Fabianism: of state-owned basic industries combined with Keynesian demand management and an expansive welfare state; and then, with the collapse of the socialist economies all across Eastern Europe since the early 1990s and under the rising influence of a new, “cultural Marxist” left, that replaced the old, traditional leftist concern for the working class and its supposed exploitation by the capitalists with a new-found love and concern for each and every group of people allegedly discriminated and oppressed by the traditional English way of life, into an increasingly totalitarian police state of “political correctness” with behavioural, speech- and even thought-control run amok – the Radical Coup.

The book is not only of interest to a British audience, however, or to people with some special interest in British history. It is in particular also a must-read for libertarians everywhere. For one, because the development in many countries of continental Europe closely resembles that in Britain, and a very similar Radical Coup has also been engendered by the ruling elites in the US. As well, Gabb does not hesitate to name names and identify the agents or agencies responsible for the Radical Coup, and many liberal and libertarian Europeans especially, who still hold Margaret Thatcher in high esteem as a champion of freedom, for instance, will be surprised to learn about her instrumental role – whether intentional or unintentional – in bringing this decidedly un-libertarian coup about. Moreover, Gabb provides detailed analyses of many issues currently hotly debated both in and outside of libertarian circles all across the Western world, and assesses their role and impetus in the process of social change. Thus, the reader will find many valuable, historically informed insights regarding the issues of “free” (mass) immigration vs. controlled borders, multiculturalism vs. cultural homogeneity, secession vs. centralization, of left-libertarianism and the new, Alternative Right, and of Christian and Islamic culture.

Most importantly especially for libertarians and, as I should confess, much in line with what I have tried to accomplish for quite some time with my own writings, in reaction to the diagnosed disease—the Radical Coup—Gabb proposes a detailed, equally radical cure—his Case for Reaction—that envisions a programmatic alignment of traditional conservatism and libertarianism with the common goal of restoring a bourgeois society as the highest achievement of Western civilization.

Next post: Interview by Juan Fernando Carpio: Our Obsession with Consumption — while Ignoring Saving and Investment — Is a Big Problem

Previous post: The Libertarian Search for a Grand Historical Narrative